The Rotary Road to Gampong Anak

The tsunami of December 26th 2004 was the most catastrophic natural disaster of our lifetime. The epicentre of the earthquake was 100 Km offshore from Aceh which suffered the worst damage and greatest loss of life. 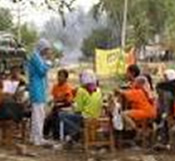 The Rotary Club of Turramurra, like many other Rotary Clubs and individuals world wide, desperately wanted to help the survivors. Then President Henk Landstra asked PP Ian Howden to form a committee and establish what Turramurra club could do. There were no guidelines or limitations for the committee, just use the Rotary network and do what you can.

formed a TSUNAMI DISASTER TASK FORCE (TDM) Some of the first clubs to act were the clubs in Bali who had the experience of responding to the Bali bomb tragedy not long beforehand. Rotarian Monica Ginting of the Rotary Club of Jakarta Gambir was one of the first to visit Aceh. She was given a briefing in Jakarta and the first job in Banda Aceh was to find bodies, put them into body bags, and lay them in designated areas for trucks to pick up. In Australia Turramurra club had received a donation of A$384,000 from AstraZeneca, and PDG Harold Sharp had found a potential way to use it effectively by working with SOS to build an orphanage.

Then President of Ubud Club in Indonesia, Asri Kerthyasa, visited Turramurra as representative of

the TDM and advised us how valuable cuddly toys were as comforters for both children and adults. Asri took back hundreds of toys and she also initiated the planning talks about the orphanage which she preferred to call Gampong Anak, meaning "Children's Village".Club Secretary Julie White together with some friends sewed hundreds of dresses and shorts for orphaned children which were distributed on subsequent visits by Turramurra Club members.

continued with Pres. Asri Kerthyasa, PDG Osman Aman, chairman of the TDM and

The TDM had land, and SOS had already found sufficient money to build their own orphanage. The solution was to build Gampong Anak on the land leased by the TDM and SOS would manage the orphanage. This meant that we needed more money. By talking with RAWCS and inviting RAWCS District Representative onto our Gampong Anak Committee, we found the avenue to Tsunami money collected by Rotary Clubs throughout Australia and at that stage not committed to a project. We were able to confidently make a start on building. 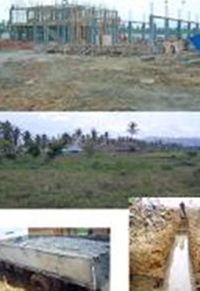 But not everything was beer and skittles. The water table is only a couple of feet below ground level and the contractor was constantly reminded that Gampong Anak is built on old paddy rice fields. 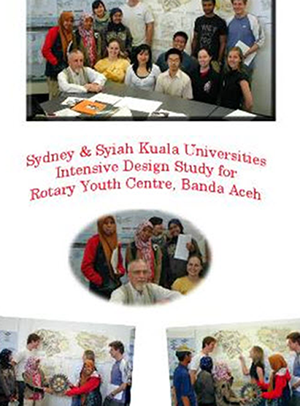 While the buildings were under construction Turramurra Club arranged for 4 final year Architectural students from the Syiah Kuala University in Banda Aceh to work with Sydney University students to plan the greater Rotary Youth Centre of which Gampong Anak will be only a part. This was a very successful venture organised by Pres Elect Peter Lyons.

District 3400 had rented a house in Banda Aceh as a centre for their numerous tsunami recovery projects in Aceh. 15 orphaned university students stayed in the centre which became known as the "Mini Rotary Youth Centre". It was also very useful for Turramurra members who needed accommodation while Gampong Anak was being built. The students were excellent cooks. 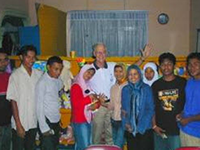 Mauliza's story is one of thousands that survived the tsunami. His father had been killed by the freedom fighters previously and he was taking his mother to the mosque to escape the rushing water. As he mounted the steps the water took his mother from his hands. Her body was never recovered, but Mauliza is pleased that he was able to save another lady who was struggling to escape the water by mounting the steps.

And so the vision of a Children's Village became a reality "Gampong Anak". 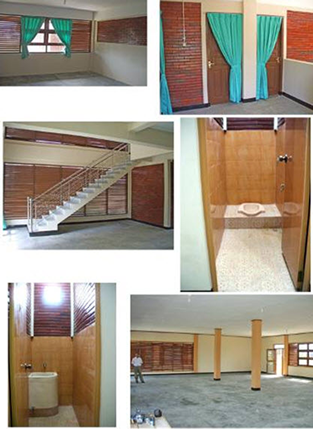 Then there was the opening ceremony with R.I. President Bill Boyd and Lorna. And the sister club ceremony between the Rotary Club of Turramurra and the Rotary Club of Jakarta Gambir. These two Clubs have worked so well together that the success of Gampong Anak is just reward. 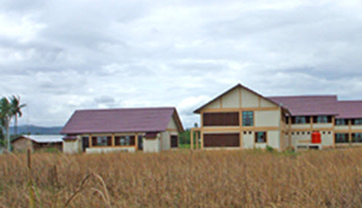 This plaque is now on the outside wall of Gampong Anak and can be seen by all as they enter the area. It lists all of the Rotary Clubs and Districts who made a contribution to Gampong Anak.

The leading words on the plaque in Indonesian and English read:
The suffering of the Acehnese people following the tsunami on December 26th 2004

was felt in the hearts of Rotarians throughout the world. Gampong Anak is the result of the efforts of the Rotary Clubs of Jakarta Gambir and Rotary Club of Turramurra to direct some of the Rotary International funds and talents for the benefit of the community of Desa Kahju, Banda Aceh.

The 6 homes at Gampong Anak are now home to boys orphaned by the tsunami between the ages of 12 and 16.

The community centre is currently being used to teach local ladies to sew and when they are proficient they hope to start a clothing outlet from which a number of the local community will benefit. Julie White and Julie Palmer will visit with a team of sewing teachers in April of 2008 and DG Elect Tony Castley has already sent 10 sewing machines as a gift to start them off. Trevor Lowes will develop a business plan with two of the ladies in March 2008.
The longer term ambition is to start a vocational centre to train the boys and girls, with the objective of preparing them to find a job. The Gampong Anak committee of Turramurra Rotary Club has committed to pay the cost of running Gampong Anak for at least the next 3 years.

If any clubs would like to support a child for A$1500 per year please contact PP Ian Howden on This email address is being protected from spambots. You need JavaScript enabled to view it.
Individuals can support a child for A$500 per year and donations are tax deductible.
There is no administrative cost, all of your donation goes to support the child and we will arrange a contact with him or her.

Gampong Anak is being managed by SOS and a Board of Governors has been formed to which SOS will respond. The board is PDG Pam Pritchard, Chair, PDG Rudolfo Balmater, PDG Tjoet Rahman, Rtn Darni Daud (Rector of the Syiah Kuala University), Rtn Hadi Nitihardjo, (Director of SOS), and the Governor of Aceh has been invited to be a patron.

For those wishing to find out more about SOS Children's Villages go to www.sos-childrensvillages.org

The 12 seat bus that was delivered prior to Christmas in 2007. The boys at Gampong Anak have a long way to go to school and there is no suitable public transport. The cost of the bus was provided by Red Cross and TJoin in Taiwan. It was brokered by the Taiwan Rotary District 3480.

Scroll down to photo gallery below

Children with disabilities sometimes miss out on exciting activities.  That's why Turramurra Rotary is starting a brand new program:

on 3rd March 2018,
we took a small group of
adventurous kids in wheelchairs
to the top of Australia’s
tallest mountain — Mt Kosciuszko!

The Mt Kosciuszko Wheelchair Summit Challenge provides an opportunity for children in wheelchairs to have a ‘once-in-a-lifetime’ experience of summiting Mt Kosciuszko, with arrangements made by Rotary and the assistance of support teams*.